(Me, age 13, August 1964, in front of my brothers Dave and Rob, up in Vermont, on Isle La Motte, trying not to think about returning to school in two weeks. But we had the Labor Day Fair to look forward to.)

Back in the mid 1960’s, the West Hartford Labor Day Fair was a big deal. It may not have had ox-pulling contests or prizes for the biggest hog, or jars of homemade jam and pickles like some of the more rural Connecticut Autumn fairs, but it did have plenty of gut-wrenching rides, teeth-wrecking candy apples and splendiferous cotton candy that would evaporate instantly in your mouth, igniting sugar bombs in your brain and enough hot dogs to feed a medium sized English village for a week.

For one whole day, which also happened to be the very last day of Summer vacation, the vacant lots between the old American Legion hall and Williams Ford, behind the library and police station, became home to the most wonderfully trashy carny town. You cajoled your parents into bringing you there or, when you were a bit older, walked there yourself. And there you stayed, until the last rotation of the Ferris wheel, hanging out with your friends, eating foods with no nutritional value whatsoever, like fried dough, chocolate pretzels and funnel cakes and drinking equally unhealthy beverages like Coke, Dr. Pepper, Orange Crush, A & W or Hire’s Root Beer, Lime Rickey, White Birch Beer and Cream and Grape Soda. It was a day to throw dietary caution to the wind, and to ride every dipping, dropping, spinning, bobbing, lurching, lunging and gravity-defying ride that was there. This was your last day before school started, and you’d be damned if you didn’t stretch out and enjoy every precious second of freedom. 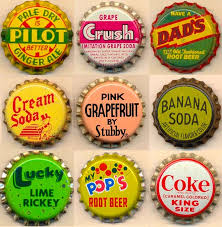 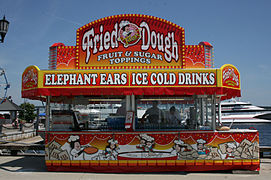 (Food and drink at the Labor Day Fair.)

Along with a hint of Canadian air that made you want to wear that flannel shirt for the first time since last Winter, there were songs on the radio that became forever imprinted in your mind as harbingers of Fall. Early September was the time when you reluctantly returned to the spirit-killing fluorescent light of classrooms, hallways and crowded cafeterias. But it was also when you saw many of your friends for the first time in three months. And it was the time when, as if by magic, mysterious, unknown, beautiful girls would appear, floating in and out of rooms, occasionally locking eyes with you and severely affecting your physiology. To this day, there are certain songs that bring me back to those times when my life got busy again, when my brooks of inspiration turned into mighty rivers, when a new band of mine started rehearsing and performing, when I fell in love and my new girlfriend inspired me to write new songs. Coincidentally, September is also when my first major label record came out (“Blind To Reason” on RCA Records, Sept. 24, 1988). 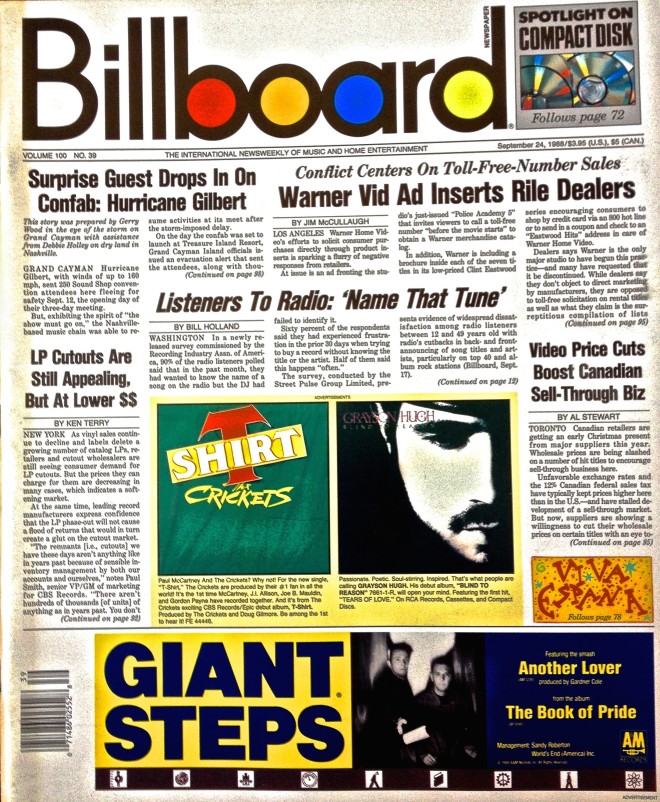 There were some great songs that were on the radio in 1964 and ’65, when I was about to start my eighth and ninth grades. Many of them were English, as it was the height of the “British Invasion”, which was really a host of British bands who were by fascinated by our American soul music, as well as some country. Even in their writing, as in the case of The Beatles, this influence was evident. I’m certainly not the first person to observe that these Brits were giving our own music back to us. I can say, without a doubt, that we needed it at that time. The insipid “vocal stylings” (sounds like the design of a split-level suburban house) of crooners such as Pat Boone and others were churning out songs that had not one centilla of rhythm or soul. American record labels, owned by rich white men, in all their racist glory, got white singers to record the black songs they “discovered”.

At any rate the songs back then mostly had English accents. Just listen HERE.

And HERE. Imagine, if you will, slow-dancing, at the age of fourteen, in Suzy Brigham’s basement, to THIS song. And, at the school dance in the cafeteria, you could really bust your moves at a faster tempo with THIS song.

Meanwhile, at the Labor Day Fair, THIS song was playing as you walked over to that girl who you hoped would be your new girlfriend, and asked her if she’d like a soda.

“Thanks”, she said, with that sweet voice. “I already have two.”

In fact she did, and the second one apparently belonged to that guy who was now walking toward you.

“Well, I guess I’ll see you guys tomorrow at school,” you say, lamely, as THIS song starts playing in the speaker right above your head, putting you momentarily in a depression as deep as the Grand Canyon.

“Oh,” she says, in a  sudden burst of energy. “I’d like you to meet my cousin Ned. He’s visiting from Virginia.”

Just then the sun comes out from behind one of the few clouds in the sky and it seems to you like she is smiling a little longer than necessary at you. The sun is back-lighting her hair, making her look positively angelic.

She beats you to the punch. “Maybe we can go to a movie sometime, on a weekend?” Her voice just gets more sweet and silky each time she speaks.

“Yeah, that sounds great”, you reply, as your heart jumps up and down like a frantic little kid, excited about getting ice cream.

“In the meantime,” she says, playfully, “we could try out this Ferris wheel. I hear it goes really fast.”

A smile spreads across your face and you fumble in your pockets for those bills you had put in there this morning.

“My treat,” she interrupts. “you can get the next one.”

It’s happening again. That feeling of something new is starting up. As you look at her smiling face and shake her cousin’s hand. who has just told you it was nice to meet you, the possibilities of your life open up inside your heart like one of those huge, panoramic Hudson River school paintings. The late afternoon September sun is shining on her hair, on the Ferris wheel and in your chest.

As you both sit down in the seat and fasten your bar, you hear another song starting over the speakers. How perfect, you think. You look at her and smile, as the music begins to unfold its wonderful feeling. The Ferris wheel starts to move, with a sudden jerk. You can’t stop smiling as you listen to that great SONG.

As you head down the tenth dip on the Ferris wheel, she looks at you and you look back. Her perfume smells great. So does her hair. You look at the sky, which is fading slowly from bright blue to dark purple, and you remember those last weeks at the beach.

“It really was a great Summer,” you say aloud, half to yourself, half to her. 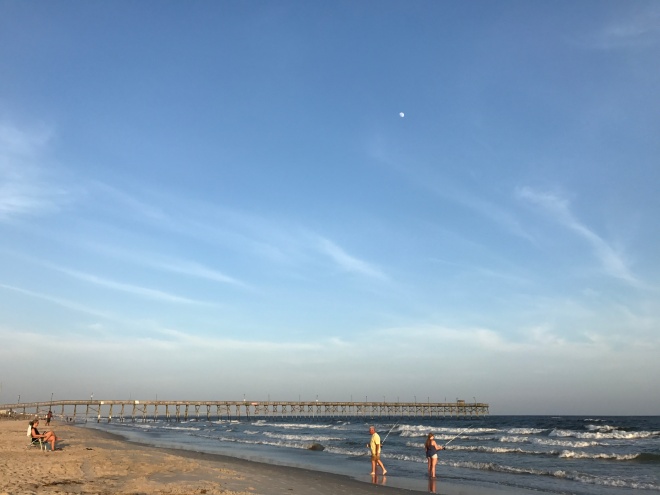 (The beach, like the moon and sun, is always there.)

7 thoughts on “SEE YOU AT THE LABOR DAY FAIR”